Online Purchase Scams are the Riskiest Type of Fraud, According to 2017 Data from BBB Scam Tracker

Online Purchase Scams are the Riskiest Type of Fraud, According to 2017 Data from BBB Scam Tracker 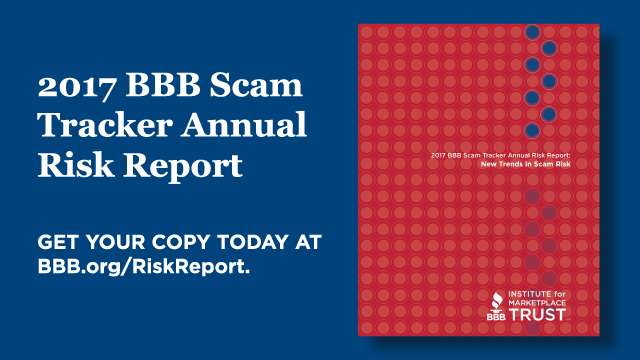 Online purchase scams are now the riskiest form of consumer fraud, according to a new report from the Better Business Bureau. In 2017, consumers reported more than 47,000 scams to BBB Scam Tracker. BBB analyzed this information using its unique BBB Scam Risk Index to determine the riskiest scams based on exposure, susceptibility, and monetary loss. The findings, released for National Consumer Protection Week (U.S.) and Fraud Prevention Month (Canada), show some significant changes from 2016:

• Tax collection scams decreased 60% in volume of reports, likely due to the arrest in India in 2016 of a the ringleader of a network of call centers primarily responsible for the IRS scam
• Online purchase scams jumped from the 4th riskiest scam to the top spot, likely due to an increase in exposure
• Home improvement scams dropped from 1st to 6th riskiest, despite a number of natural disasters that traditionally bring out “stormchasers”

Young people continue to be at higher risk for scams, and susceptibility decreases with age, although dollars lost increases when victims are older.

There was good news in the 2017 BBB Scam Tracker Annual Risk Report: New Trends in Scam Risk from the BBB Institute for Marketplace Trust. Although the total number of scam reports was up, the overall susceptibility was down. The percentage of consumers who actually lost money to a scam fell from 18.8 percent in 2016 to 15.8 percent in 2017. The report also notes a 17% decrease in the median monetary loss, down to $228 from the previous year.

One interesting phenomenon from 2017 was the prevalence of a new scam, dubbed “Can you hear me?” for the opening line that was extremely common early in the year. BBB Scam Tracker received more than 10,000 reports on the ‘Can you hear me?’ scam, but virtually none of those reporting could point to an actual monetary loss due to the calls. BBB concluded there was no credible evidence to categorize the calls as scams, and controlled for them in the data analysis to determine the riskiest scams of 2017.

The most common online purchase scams in 2017 were related to pets, clothing, cosmetics, electronics, and automobiles. The offer of free trials was a common tactic for these online purchases: 67% of scams involving cosmetics and 60% involving nutrition products mentioned a free trial opportunity.

Another significant increase was in the category of investment scams, which tend to target older age groups and come with a higher average monetary loss. This scam type jumped from the 6th riskiest in 2016 to the 2nd riskiest in 2017.

Home improvement scams dropped from the riskiest scam in 2016 to 6th riskiest in 2017. Surprisingly, the drop occurred in a year marked by several weather-related disasters, including hurricanes Irma and Harvey. BBB believes this may have been due to a significant increase in information from the media and consumer protection groups around home improvement scams following disasters.

The top ten riskiest scams in 2017 were:

Travel and vacation scams joined the list, with top destinations mentioned in the scams: Orlando/Florida, Disney, Mexico/Cancun, and the Bahamas. Also new to the top ten is the government grant scam. Two scams left the top ten list: romance scams and sweepstakes/lottery/prize scams.

One of the most common tactics of scammers is impersonation, where the scammer pretends to be a legitimate business that is well known and trusted by the consumer. The top legitimate organizations that were used by scammers in 2017 were: U.S. Internal Revenue Service; U.S. Government (Grant/Treasury/Reserve/Medicare); Better Business Bureau; Publishers Clearing House; and Microsoft.

Even though a phone call is the primary means of contact for all the reports, in the last year, websites took over as the top mean of contact for scams with monetary loss, which means that the susceptibility on the web is higher than phone calls overall.

Regardless of the scam, scammers often rely on the following tactics:

• The promise of getting a “great deal” (which is often too good to be true);
• Pressure to respond immediately with offers that are time sensitive and prices that “can’t be guaranteed;”
• Intimidation (for example, “You are under federal investigation”; “You will be arrested within one hour unless you call this number”); and
• Isolation, which aims to force a decision without others’ opinions.

Scammers can also be very nice and personable, which can defy “bad guy “stereotypes and make targets more at risk.

Scammers are clever and are always adjusting their tactics, so everyone is vulnerable. BBB Scam Tracker is helping us identify higher risks and debunk long-standing myths, but no one should let down their guard. For more information on specific scams and tips on how to avoid them, go to BBB.org/ScamTips. To report a scam, go to BBB.org/ScamTracker.